PSD Photo of the Month Archive 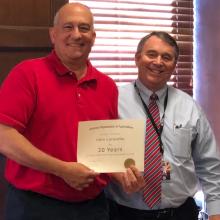 Congratulations and thank you to John Caravetta, Associate Director of the Plant Services Division. John has spent the past 20 Years with the Department protecting agriculture and horticulture in the State from destructive and invasive pests that continually threaten Arizona's agricultural resources. John has also been a pivotal figure in creating innovative ways to facilitate interstate and international trade for Arizona's agricultural producers.  John holds a Master's degree in Agronomy from Purdue University in Indiana and currently serves as Vice-President of the National Plant Board, a 50-state organization representing Departments of Agriculture's State Plant Regulatory Officials. John also represents the Division on a number of other boards and associations that represent Arizona's agricultural interests. 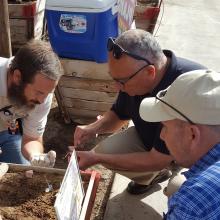 Associate Director, John Caravetta works with Phoenix Operations Manager, Keith Miller, and former Phoenix Operations Supervisor, Scott Yates, in the use of new technology for the early detection of Red Imported Fire Ants (RIFA). The early detection and rapid response actions taken by the Department are a priority in maintaining the pest freedom Arizona benefits from in the absence of the establishment of this dangerous plant pest. RIFA costs the U.S. billions of dollars annually in damage to agricultural crops and equipment, livestock, wildlife, public health, and electrical and utility units. Control methods are extremely costly. 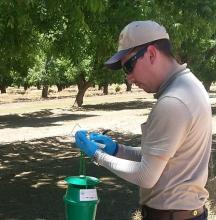 Arizona produces some of the highest quality pecans in the world. The State's pecan industry is 4th largest in the nation and provides an excess of $43 million in production value. This picture shows Tucson Agricultural Inspector, James White, servicing one of over 2,300 pest detection traps deployed to monitor the growing 22,037 acres of production pecan orchards. This level of monitoring ensures that Arizona is free from dangerous plant pests that could have a negative impact on the quality and exportability of harvested pecans. 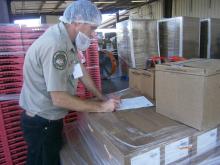 Kelly Downing, Yuma Agricultural Inspector with the Plant Services Division (PSD)  writes a Phytosanitary Certificate for a shipment of agricultural products that meet the pest cleanliness standards of an importing foreign country. The annual value of agricultural exports is over $4.2 billion. In 2017, PSD issued 1,445 international export certificates (up 31% from 2016) to over 69 countries.