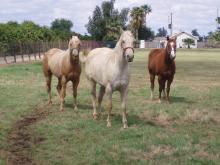 West Nile Virus (WNV) is an arbovirus in the Flaviviridae family that can affect a wide variety of species including birds, horses and humans making it an important zoonotic disease.  While at one time WNV was limited to the Eastern Hemisphere it is now considered endemic in North, Central and South America having been introduced to the United States in 1999.   It is here to stay!!!  WNV is primarily transmitted by mosquitoes which are typically most active at dusk and dawn and in shaded areas with available standing water in the surrounding area to serve as breeding grounds.  The mosquito feeds on an infected reservoir host (various species of birds) and subsequently bites and transmits the infection to horses or humans.  Thus WNV is an infectious disease but not a directly transmissible (contagious) disease between horses or between people who are dead end hosts.  The term dead end hosts means that the infected individuals do not carry enough viral particles in their blood or body secretions to transmit the disease back to mosquitos or to other adjacent animals.  Typically therefore, WNV infection is only associated with a mosquito having taken a blood meal from an infected bird.  Once a horse or human is infected with the virus, there is approximately a 5-15 day incubation period before disease manifests.   Clinical signs of disease include fever, lethargy, neurologic signs (stumbling, falling, weakness, paralysis, tremors), hyper-reactivity, and loss of control over urinary function, vision or difficulty in swallowing.  The course of disease and the outcome depend on the vaccination status of the animal and individual susceptibility factors.  The key to control of WNV is a two-pronged approach.

Firstly, there are a number of safe, clinically efficacious vaccines available on the market.  Around the time of the original introduction of this disease back in 1999, some horse owners reported that the vaccines used then had some significant associated complications or had been a little on the “hot” side with some horses developing clinical signs of disease.  Nearly 20 years have passed since those early vaccines were being hastily developed to prevent loss of life in response to a new emerging disease threat.  Vaccine technology has since advanced and many refinements to the vaccine strains and adjuvants (ingredients to stimulate the body’s immune response to the vaccine) used have occurred making them very safe with minimal side effects.  At this point in time there is absolutely no scientifically justifiable reason not to vaccinate your horse.  It is true that no vaccine (regardless of the disease being vaccinated against) on the market today whether it be for humans or animals is 100% effective in preventing infection or disease all of the time.   However, excluding those animals that do end up being fully protected from disease, the main benefit of vaccinating is that in the uncommon event that your animal isn’t completely protected, the form of disease that does end up manifesting is much more mild and responsive to supportive veterinary care (anti-inflammatory medications, antivirals, free radical scavengers).  This is undeniably associated with a much better prognosis for recovery with minimal side effects or deficits of neurologic function than those animals that were unvaccinated and completely naive.  The vaccines that we use now generally only cause a little muscle soreness in the neck and may result in a little lethargy and being “off” for a couple of days but this is no different than what happens to you or I when we get our annual flu vaccine.

The second facet to controlling WNV is controlling the mosquito vectors that transmit the disease.   Eliminating sources of standing water to prevent breeding grounds for mosquitoes from forming is crucial.  From a management standpoint, applying fly sprays and turning your horses out during periods when mosquito activity is minimal during the day (mosquitoes are most active at dusk and dawn and in highly shaded, moist or irrigated areas) is recommended.  Fans providing constant airflow through a stable can help reduce the ability of the insects to fly to their targets effectively.  Cleanliness in cleaning up manure and debris around the property and maintaining waterers in a clean and operational manner are also important.

By following these general guidelines, you can minimize the likelihood of a significant exposure or occurrence of WNV in both your horses and potentially your family members or yourself.