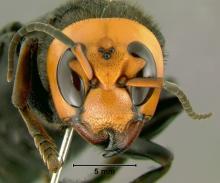 The Asian giant hornet (AGH), or commonly referred to as “The Murder Hornet”, is native to the temperate and tropical areas of Asia and Far East Russia.

In December of 2019 a resident of Blaine, Washington, near the Canadian border, reported sighting a large wasp on their property.  This wasp was later identified as Vespa mandarina, the AGH.  To date, there have been 45 confirmed sightings in Washington State and as of April 2022 the Washington State Department of Agriculture has removed a total of four (4) nests of AGH.

However, due to its potential impact on honey bees, the Arizona Department of Agriculture takes the potential introduction of AGH very seriously and asks that you report any potential sightings to Jamie Legg, Quarantine Program Manager, at (602) 542-0992 or [email protected].